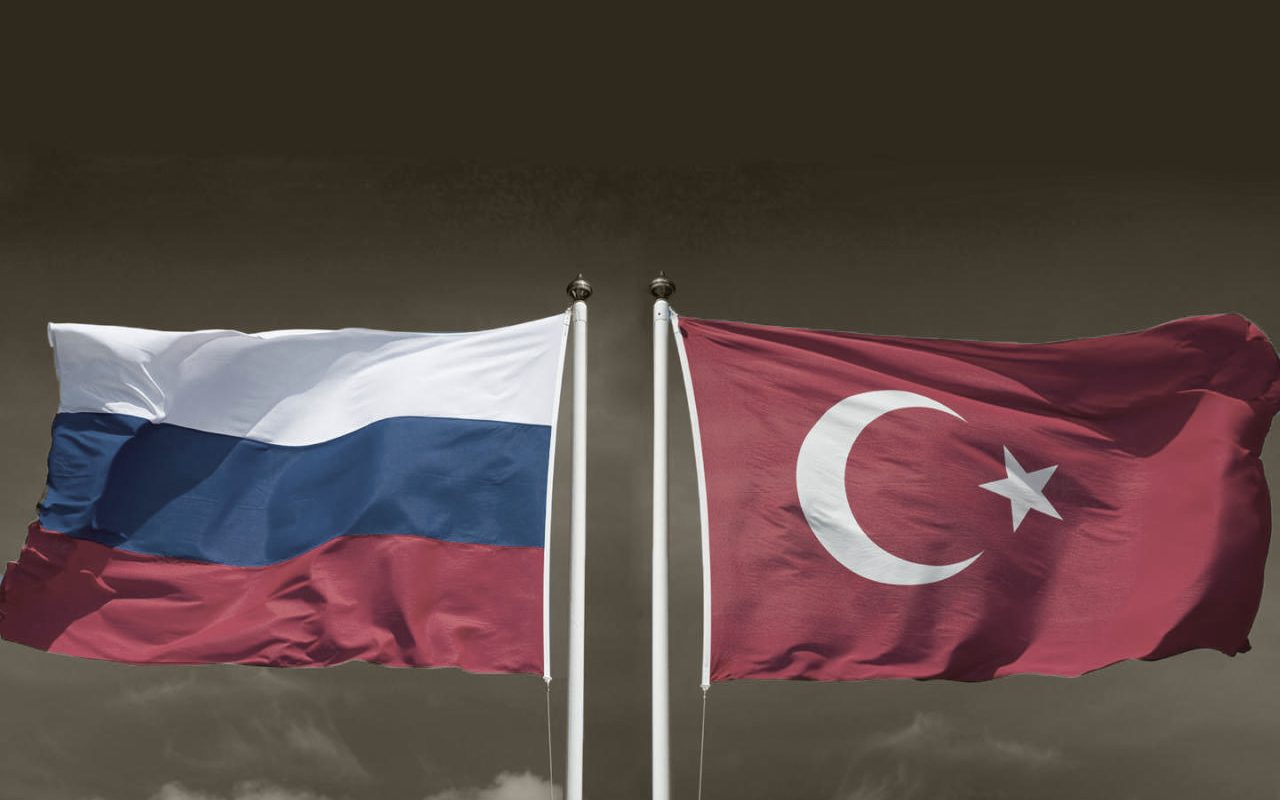 Turkey has a long history with Russia. Relations between the two states have shaped the region more or less throughout history. Russian contribution to the demise of the Ottoman Empire is undeniable; besides its direct or indirect actions to reshape demographics of Caucasus and Balkans. Turkey perceived Russia in three fashions in 20th century as Bilgin and Coş pointed out.12 Bilgin, Pınar and Coş, Kıvanç, (2010), “Stalin’s Demands: Constructions of the ‘Soviet Other’ in Turkey’s Foreign Policy, 1919-1945”, Foreign Policy Analysis, V.6, 43-60 First is as a rival. Second, during the interwar period, a sincere friend. And finally, the Turkish perception of Russia turned to rival and expansionist view again. Final fashion is adopted after 1945, due to Molotov Communication; which can be simply explained as a threat to obtain certain regions in Turkey and change the Straits regime.

Molotov Communication was likely a long-waited opportunity for Turkish policy-makers. Even Russians had similar demands before 1945, due to fragile situation of the young republic and unstable nature of world order in the interwar period; Turkey decided to ignore these demands and keep friendly relations with Russia on going anyway. While doing so, Turkey also gave Trotsky political asylum on the contrary of dissatisfaction of Stalin and certain Western leaders.13 Coşar, Ömer Sami, (2010), Troçki İstanbul’da, Türkiye İş Bankası Kültür Yayınları This action proves that; although young Republic using friendly rhetoric to Russia; it still seeks to protect its position as an independent state and well aware of the quality of Russian threat. After 1945, Turkey was more powerful than it used to be in 1921 and more importantly, due to the emergence of a bipolar world; it found a valuable alliance to stand firm against Russia. So, the need for Russia as an ally had been disappeared.

To sum it all, it is obvious that Turkish perception of Russia as a “sincere friend” in interwar period was nothing more than a diplomatic manoeuvre to tame aggressive attitude of Russia; especially when it merges with revolutionary and expansionist ideas of USSR. Besides this phase which relying on strategic decisions, Turkish perception of Russia is stood the same throughout history: aggressive, expansionist and rival. This is why Turkish leadership saw Molotov Communication as an opportunity to change the relations’ quality and protect itself from the main threat to its existence properly; rather than just attempting to tame it.

On the other hand, the current situation is looking different. Turkey has purchased an advanced air defence system from Russia and recently tested it.14 Turkey tests Russian-made S-400 defense system Turkish will to use these systems are clear and Turkey also expresses its desire to make further purchases. In addition to those, in conflict zones like Greater Idlib Area; Turkey and Russia exercised joint patrols until Russian withdrawal.15 Russia did not participate in joint patrol in Idlib Moreover, Russia invited Turkey to participate in Kavkaz 2020 Drill which was the only invited NATO country. These sorts of military relationship examples with a revisionist state, like Russia, often understood as an example of bandwagoning. Yet, the quality of this convergence is debatable.

In a quest to understand the quality of this convergence; one might ask if the historical record of Turkish-Russian relations is based on rivalry and often turned into hostility with ease; why is the recent Turkish-Russian convergence happening? It is easier to read this convergence by relying on widespread leadership analyses but it would create a wrong understanding. Leadership analyses, although a useful instrument, always bearing the danger of being limited by biases and neglect a much deeper reality than just one person’s mindset. It is without a doubt, there are more than that to investigate if we truly want to understand recent Turkish-Russian convergence.

With the start of civil war in Syria, Turkey took the side of revolutionaries to oppose to Assad regime. Open political and covert military support turned into open military support in 2016 with the Operation Euphrates Shield against DAESH. After that, Turkey launched two other military operations in the north of Syria against PKK’s Syrian branch. Russia, on the other hand, supported mainly the Assad regime. This confrontation led to an escalation between those two states. Tensions between two states have considerably increased after the Turkish Air Force shot down a Russian SU-2416 Turkey’s downing of Russian warplane – what we know , which violated Turkish air space. It was the first and only time a NATO ally downed a Russian military jet. After the failed coup d’etat attempt in Turkey; tensions were decreased due to Russian positive stance to the legitimate Turkish government.

Turkish-Russian tensions increased again in Greater Idlib Area after the Assad regime launched an offensive in the region with the support of Russia and Iran; in violation of Astana and Sochi Agreements17 “Targeting Life in Idlib” – Syrian and Russian Strikes on Civilian Infrastructure;  Human Rights Watch, 2020 Iranian support mostly consists of manpower and leadership; while Russian support offers firepower and close air support in addition to them. In response, Turkey deployed a considerable force in the region to stop the violation; yet, allegedly a Russian jet bombed Turkish forces which escalate the situation18 Syrian airstrikes kill dozens of Turkish troops in Idlib — as it happened and Turkey downed a number of Assadist helicopters and planes along with destroying a sizeable force of the related militia19 Syria: Turkish operations spook Hezbollah militias . Eventually, the conflict has “frozen” by an agreement that made between Turkey and Russia; which recently Russia is denying to comply and the footsteps of a new offensive by Assad regime in the region can be heard.

Russian intervention in Libya is another topic of disagreement between Turkey and Russia. Unlike Syria, Russia is intervening Libya by supplying weapons through UAE and deploying Wagner, the notorious Russian PMC. Turkey, on the other hand, supporting GNA, UN-recognized government of Libya, through limited special forces deployment and extensive use of armed UAVs. Similar to Idlib, Turkish armed UAVs managed to destroy multiple Russian air defence systems; and unlike Idlib, Turkish effort managed to be successful in strategic level and pushed Russian-backed Haftar forces to Sirte-Jufra line20 Libya: Haftar militias retreat, leave 48 bodies behind , thus, securing NATO’s southern flank. Again, the conflict has frozen through diplomatic action there. Increased existence of fortifications and Wagner personnel in Sirte-Jufra line also questioning Russian commitment to diplomatic efforts.

Third recent friction between Russia and Turkey is happening in Ukraine. Turkey didn’t acknowledge the illegal annexation of Crimea and won’t acknowledge it21 Turkey doesn’t, never will recognize illegal annexation of Crimea, Erdoğan says . There are two reasons for this certain verdict. First, Turkey does not favour an aggressive Russia who holds Crimea, it is a major threat in the northern flank of Turkey, and Turkey doesn’t need another front to fight. Second, nationalistic sentiments in Turkey are still remembering the fate of Crimean Tatars and acknowledging Crimea as a part of Ukraine, yet homeland for Crimean Tatars.  This active diplomatic support turned into material cooperation between Ukraine and Turkey; after a recent agreement between those two countries; which allow them to develop certain military systems together; while deciding the purchase of Turkish armed UAVs by Ukraine22 Turkey, Ukraine set to boost strategic partnership Unlike many NATO allies, Turkey is stepping up in Ukraine case to share necessary material capabilities to contribute Ukraine’s counter-terrorism operations and fight a hybrid war against Russia. So, Turkish support to Ukrainian cause is deriving from both strategic and ideologic reasons.

Our first question is standing stood; why is Turkish-Russian military convergence happening if there are a lot of reasons for those two states to become open enemies. To answer this question, it is vital to examine NATO’s position in those fronts. In the first two fronts against Russia, Western allies of Turkey has abandoned Turkey.

In Syria, it happened both downed jet crisis and in Greater Idlib Area; NATO chooses to act considerably passive while a member of NATO is actively targeted by Russian forces and actively engaging against Iranian forces. Turkey has left alone against Russia and Iran in Syria; while protecting itself and south-eastern flank of NATO. While Russia is gaining ground and fortifying its position in Syria; Iran is going to reach the Mediterranean Sea if the Assad Regime will win the war; while NATO is just watching and let Turkey fight alone.

This strategic mistake got worse in Libya case. A fellow NATO ally, France, decided to pursue its geopolitical agenda in the region and indirectly helping Russia by constantly acting hostile against Turkey. France is pushing for a conflict with Turkey in the Eastern Mediterranean, which is not directly related, and giving Russia much needed time for it by undermining Turkish operations in the region. While France is an already proven unreliable ally with its acts in 1966, Turkey is expecting full support from NATO, only to be disappointed by its allies. The ideological and irrational attitude of NATO is still reluctant to acknowledge the Turkish position in the region. In Ukraine, with the recent agreement, Turkey is one of the biggest contributors to Ukrainian cause among NATO allies; thus, denying a possible threat to NATO’s eastern flank.

The view is self-explanatory. It is clear that Turkey’s indirect fight against Russia is one of the main reasons why NATO’s southern and eastern perimeter is still secure. Yet, Russia also can’t afford to make Turkey an open enemy of itself. Since Russia is exploiting NATO’s ideological and irrational attitude to Turkey to undermine the alliance; and it is succeeding to do so. Certain NATO allies and irrational elements within allied states are creating the perception of Turkey as a black sheep of alliance and reflecting Turkey’s position as an unreliable ally; while Turkey is fighting an indirect war against Russian agenda in three different regions; unlike France, who is helping to advance it in Syria and most notably in Libya. Maintaining a relationship with Turkey, Russia is undermining the alliance while constantly weakening the most committed ally state through an indirect fight against it in three different regions. This is a hybrid strategy for Russia to deal with a complex situation.

NATO’s reluctant attitude to help Turkey, give Turkey no choice but to act like a loner. In a similar fashion with the interwar period; Turkey is acting carefully against Russia. It is quite possible that Turkish diplomatic interactions with Russia are aiming to tame Russia. Through arms purchases and limited military relationship; Turkey is taming and preventing Russian aggression against itself. It is a necessary compromise for a state that has no reliable ally to help it survive. The rationale behind these interactions is not deriving from a shift to Russian block or Turkey’s desire to become a revisionist state but because of NATO’s unreliability deriving from its irrational and ideological stance against Turkey. Right now, this irrational stance is undermining Turkish survival and security in the region. Like all states, Turkey also has the right to do what necessary to survive in international relations. If NATO will start acting rationally again, Turkey may decrease the interactions with Russia. Since the main rationale of Turkish-Russian convergence for Turkey is to tame and limit the threats that are causing by Russian behaviour. Moreover, this convergence is creating an interdependency between Russia and Turkey. If NATO stops acting irrational and ideological, it is possible to use this interdependency as an advantage for the alliance’s agenda.

To sum it all, Turkish-Russian convergence is a strategic decision of Turkey; mostly deriving from NATO’s unreliable attitude against Turkey. Since states are not atomistic beings, NATO’s actions shape Turkish decision-making and thus making Turkish decision-makers to take some tough calls. These tough calls do not mean any shift in Turkish stance in the international system; they just mean Turkey is taking necessary measures to survive.